Participated in The Ride 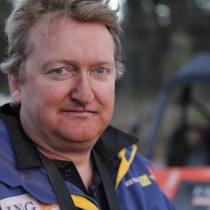 After dominating BMX in Western Australia's south-west, I thought it was time to get into motocross. My mother bought me a year-old RM 125 from friends, and I started training hard on motocross tracks and local tracks. I rode every day. I even did a Jeff Leisk motocross school. We were on holiday in Collie (and of course I demanded we take the bike) and I was practicing around a pretty cool track some locals made in the bush. Somehow I ran wide on a turn and went down a hole and got thrown over the handlebars. I got knocked out and woke up paralyzed.

I am working hard on my company (co2smart.com.au). We want to accelerate the adoption of electric vehicles by large fleet operators. We will be running a trial starting at end of year with 10 electric vehicles running around Perth for 2 years. Transport generates 14% of all CO2 emissions, and electric vehicles recharged with solar, wind or other clean source can reduce that to zero.

Other personal points of interest

I lived in Holland for 16 years and only returned in October 2008. The family loves it here, maybe we stay...